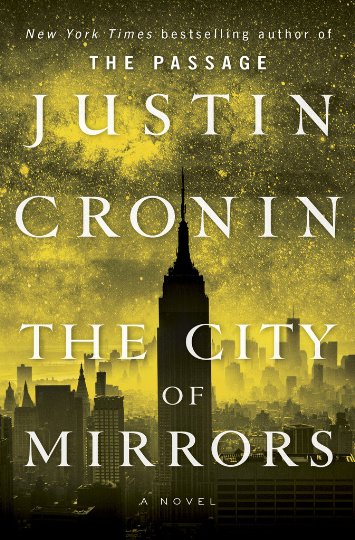 Seriously, don’t read this if you don’t want spoilers. It’s been six long years since “The Twelve” (which came out only two years after “The Passage”), so don’t let this review spoil your own anticipation. OK?

Four years is long enough for me to have forgotten some of the loose ends and even characters of “The Twelve.” But reunions — often one of the most powerful plot devices in fiction — can be pretty powerful in real life, too, so I was excited to be taken back into Justin Cronin’s world of vampires, or virals, as the characters call them, especially to be back with Amy.

The trilogy has always been about Amy, even when she isn’t on the page. She’s the girl who could talk to animals, the girl who could fight The Twelve, the girl who fell in love with Peter Jaxon — a young hero of the First Colony. In “City of Mirrors,” she appears in two forms: in Peter’s dreams as a companion and lover, sharing a home in the country with a piano she likes to play (perhaps it is the same farmstead where Theo and Maus were left behind in “The Passage”); and then in reality as a prisoner contained in a ship, where she’s kept alive by Greer, and where she shares her captivity with Carter. Her story is the story of potential energy: she’s held back for nearly half the novel, arriving first to help at the military base in Texas, and then moving on to New York City, the City of Mirrors of the title, to confront Zero, aka Fanning, once and for all.

Time, of course, is one of the most malleable substances in Cronin’s trilogy. We have a “now” of the narrative that is a few years after the concluding events in “The Twelve” — the combustible moment at the Homestead in Iowa in which it seems the final 11 of The Twelve are killed. In that now, we catch up with Peter, Michael, Lore, Sara, Hollis, and others, as the life has entered a new phase, in which it seems as if the virals are no more, and too many people are living in the military base in Texas, and so some people go off to live out in the open, unprotected. Meanwhile, Lish — she of the many knives — has been called to New York City to meet Zero.

In New York, Zero tells his backstory. So even though we are still in the “now” of the narrative, his extra-extended flashback — from childhood, through college, grad school, and becoming a professor, and, eventually, getting involved with Lear’s scheme in Latin America that turned him into Zero — feels like we’ve gone back deep in time, about 100 years before the “now.” Here’s the thing about Fanning’s story — it isn’t that interesting. At times it feels like the kind of speech a villain gives near the climactic moment of a story, in which all the truths are revealed about what’ been really happening and/or the villain exposes his or her own (twisted) humanity and (ill)logic. The brilliant thing about it is that Cronin knows this, too. He knows he’s writing in the first person a biography of a person who has lost his mind and who is evil. A applaud Cronin’s moving this speech to near the front of the book — so it wouldn’t weigh heavily to the more action-oriented ending. And when Zero/Fanning is done telling his story, the next section takes us back to the heroes of Peter, Michael et al, it is twenty years later.

I laughed aloud when I saw that time jump. It was as if Cronin were making fun of Zero/Fanning’s gas-baggery; however, not all can be forgiven. There’s this little matter of Fanning as Fanning — well before he became the monster Zero — killing someone after a convoluted bit of plotting that seems to be trying to show how off the deep end Fanning already was, but it is probably the one least believable bit in the novel. It seemed unnecessary.

Anyway, the various times in the novel include that first now, Fanning’s tale, twenty years later and, of course, the one thousand or so years later that has been referenced in the earlier novels as being writing from an academic conference in New South Wales. This time, however, that future time is presented as not just academic writing, but with new characters and situations (an academic conference, for one), that can be read as an extended coda, and that, even though it may feel taxing to be introduced to all new characters so late in the trilogy, there is a great payoff in the end that I won’t give away.

Here’s what’s been happening: Peter Jaxon is now the President of Texas, or something like that, though the people he reluctantly rules over are mostly beyond the gates of military compound that had been a safe haven. People are farmers and homesteaders far beyond the gates of protection. We even see the good folks in Iowa who, after the destruction of The Twelve, had decided to stay and make a good of it in the new viral-free world. Or so they think.

We’ve seen, however, through Lish in NYC that Zero/Fanning still has an army of virals under his command, and one of those people under his command is Lish herself (even if she isn’t totally viral, but a little more like Amy), and Zero/Fanning has all the time in the world to eventually strike — considering his immortal and all.

Meanwhile, Michael, through Greer, knows this truth — that virals are still out there. So for twenty years he has been repairing a massive cargo ship to set sail to a South Pacific island that has been in Greer’s visions. Only problem is, the ship can hold only about 700 people, and there’s now like 100,000 people living in Texas.

So those are the major plot points — how will it all turn out in the end? I have to admit, I was a bit worried about the ending. Remember “The Strain” trilogy (which came out in what seems like rapid fire in 2009, 2010, and 2011) and how what seemed like a battle between humans and vampires turned out actually to be a biblical conflict featuring archangels? I wasn’t sure if Cronin was going to go religious on me like that, and knowing his taste for time jumps, I wasn’t sure where it would end up. In the end, though — and I’ll leave it up to you to discover — he’s crafted a truly satisfying conclusion.

Other reviews of note:

2 thoughts on “Review: City of Mirrors a satisfying conclusion to The Passage Trilogy”