This review was originally published in May 2001 in the Albany Times Union. 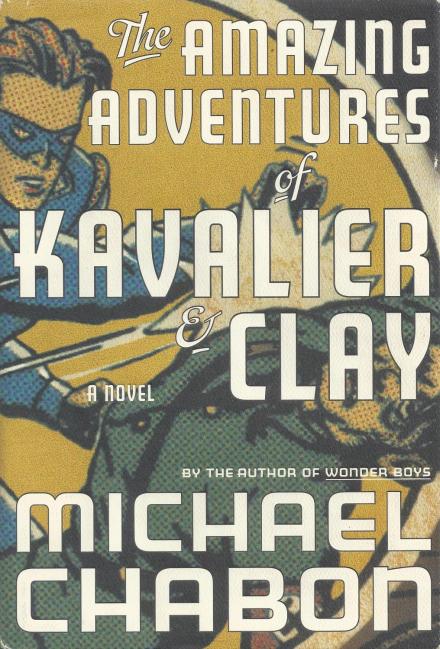 Michael Chabon’s Pulitzer Prize-winning novel, “The Amazing Adventures of Kavalier & Clay,” is a generous journey through the rise and fall of the Golden Age of comic books. It is a history lesson of the highest order: it’s informative but it’s also a humorous and richly entertaining read.

More than the world of comic books, the novel stretches from Prague to Antarctica to the top of the Empire State Building. It includes Jewish mysticism, secrets of escape artists, vaudevillian characters such as the Mighty Molecule and historical figures like Salvador Dali and Gov. Al Smith.

Chabon excels at this kind of literary juggling of vivid, off-the-wall characters and outrageous events, but his true talents lie with depictions of youthful, manic energy.

The title characters are but teenagers when they come up with the Escapist, a comic book hero who frees people from the shackles of oppression. They both desire to make money, but for different ends. Sammy Clay (nee Klayman) is more of a schemer than an artist, his mind full of plots, a deep knowledge of comic books and wild dreams that comics are his ticket to freedom from Brooklyn. His cousin Josef Kavalier, a recent escapee from German-occupied Prague, buys into Sammy’s dreams, wanting money to buy his family’s passage to America.

The cousins experience so many wonderful adventures that Chabon’s sentences overflow with energy. In this example, Chabon captures a feel for New York City and the immigrant’s sense of hope:

“The whole morning, the rattling ride through the flickering darkness under the East River, the updraft of Klaxons and rising office blocks that had carried them out of the subway station, the ten thousand men and woman who immediately surrounded them, the ringing telephones and gum-snapping chitchat of the clerks and secretaries in Sheldon Anapol’s office, the sly and harried build of Anapol himself, the talk of sales figures and competition and cashing in big, all this had conformed so closely to Joe’s movie-derived notions of life in America that if an airplane were now to land on Twenty-fifth Street and disgorge a dozen bathing-suit-clad Fairies of Democracy come to award him the presidency of General Motors, a contract with Warner Bros., and a penthouse on Fifth Avenue with a swimming pool in the living room, he would have greeted this, too, with the same dreamlike unsurprise.”

Chabon’s writing is lyrical and evocative, such as “gum-snapping chitchat,” but his words sometimes betray his slight of hand and draw attention away from the story. For example, in one scene Josef doesn’t roll a cigarette, he “prestidigitated a perfect cylinder.”

Nonetheless, bringing together Kavalier and Clay allows Chabon to examine greater themes such as the immigrant experience, the promise of the American dream, and the modernist diffusion of high and low culture. Josef, for example, was educated at The Academy of Fine Art in Prague, whereas Sammy sold things such as shoelaces, seeds and candy bars door-to-door since the age of 6. Together they create comic books that are often, especially by Anapol, referred to as trash, though the Escapist and their other titles are recognized as standing out from the rest.

Set against the backdrop of World War II, the cousins’ adventures take on greater importance – showing the vital creativity of Jews in America at a time when Hitler was intent upon killing all Jews.

This importance points to one of the weaknesses of the novel, the uneven treatment of Josef and Sammy in the latter parts of the book. Though the title suggests the novel will be about both Josef and Sammy, it may be the nature of story telling to allow only one main character.

As suggested by the name Kavalier, Josef’s story is more of a hero’s tale, filled with urgency and romantic drama. After all, he wants money to save his family from Hitler. His story is even mystical in his connection to the ancient Golem of Prague. And unlike Sammy, he confronts the futility of his creativity, recognizing that defeating Hitler in the plots and pictures of comic books does nothing to stop the Nazis. He signs up to fight in the war.

Sammy’s story lacks that kind of narrative sweep, but he still has moments of heartbreaking drama, especially in Chabon’s sensitive portrayal of him as a young man filled with wonder and fear at his own homosexuality. However, Sammy’s issue with his sexuality doesn’t seem to be resolved even though it seems to be one of the most important aspects of his life. He never comes to terms with his sexuality as an adult. Rather, it seems Chabon is using his sexuality as a pre-text to include information about a 1954 Senate committee on the role of comic books in juvenile delinquency. Though this information is interesting in terms of art and government censorship, it lacks the same dramatic energy as Kavalier’s story.

Nonetheless, Chabon shows himself moving in a wonderful direction with his fiction, with broader landscapes, long time periods and an adherence to historical realities.

Through the rise and fall of the Golden Age of comic books, Chabon shows us the joys and limits of creativity, the difference between art and real life, and the enduring human dilemma between duty and the desire to escape.